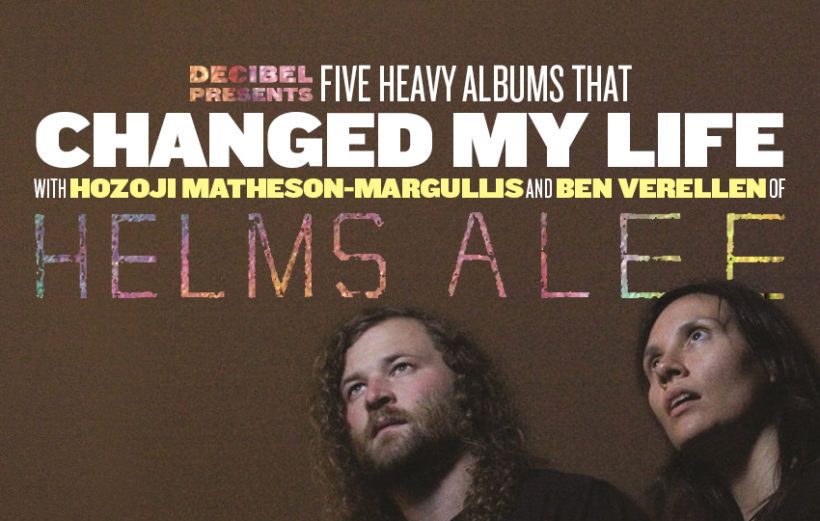 Helms Alee are nothing if not mysterious, the Seattle-based trio laying down a sound somewhere between atmospheric sludge, post-hardcore and post-metal throughout their catalog, which now includes fifth album Noctiluca, out tomorrow on Sargent House.

To celebrate the release of the album, and to try to understand the minds that create the band’s unique sound a bit more, we caught up with drummer/vocalist Hozoji Matheson-Margullis and guitarist/vocalist Ben Verellen to find out what five heavy albums changed their lives.

HOZOJI MATHESON-MARGULLIS: This is the first truly weird rock record I got into on my own as a kid. I got it at age 13. At the time I was mostly listening to radio rock and hip hop. My dad had played records like Pink Floyd’s Ummagumma around me when I was growing up so I was not entirely unfamiliar with how weird rock music could get. But this was the first contemporary music that I was exposed to that was being this bold in putting their true personalities into their songs. The first track on the album, “Eyes Flies,” creeps in super slow with a kinda scary bass riff and several minutes of straight-up guitar feedback and random-feeling drum smashing. I was so intrigued that when I went to that week’s guitar lesson I brought the record in and asked the dude to teach me how to play like that. Needless to say he was at a loss. After Gluey Porch Treatments I started digging into lesser-known bands and was exposed to wealth of unique, honest music that I had previously not known existed. So that record was the catalyst that sent me into this world that I have been hopelessly attached to ever since!

MATHESON-MARGULLIS: One of my childhood besties had an 8-track player in her bedroom with a small collection of her dad’s 8-track cassettes. It was the only source of playing music in her bedroom so we would play those cassettes over and over while we hung out. Black Sabbath Black Sabbath was one of those cassettes. I was very intrigued by how scary and weird the music was. With the exception of the song “The Wizard” (which drove me fuckin’ nuts at the time for some reason) I felt like I could listen to that album all day every day. I had been getting into contemporary local weird rock music, and hearing this album made me realize that those sounds weren’t necessarily new. I began to understand and appreciate the relationship of how generations of music inspire new generations of music. All those thick, nasty-sounding riffs on that record could most definitely be heard reverberating in the bands I was getting into. Those bands were elaborating on the theme and passing on new ideas that my generation would later use as inspiration to create our new sounds.

BEN VERELLEN: When I was 13 years old, my older (by 2.5 years) brother Dave came home saying he’d “made the band!” He’d convinced Brian Cook (Russian Circles, Sumac, These Arms Are Snakes, etc.), Dave Knudson (Minus the Bear) and amazing drummer Tim Latona that he was going to be the singer/frontman for their high-school band, Botch. The combination ended up being a super-inspired group of kids that pushed each other through adolescence to make better and more challenging music and to use their music to adventure around the world. They quickly grew a moshy teenage following around Tacoma, and pretty soon an older kid (maybe 21 years old), Wally Young, saw them and offered to put out Botch’s first official record, a four-song 7” called Faction. To me, it was the legitimizer of what was undeniably the way forward, and I’ve tagged along and followed their lead into adulthood. By far my most formative record/live show/band experience was witnessing what those guys put together firsthand. At the time I thought everybody’s older sibling did something cool like Botch; now I know how unique they were and how fortunate I was to be around for that.

VERELLEN: You know, most people who identify as fans of heavy music really like Black Sabbath, and I get it… their music is low, it’s plodding, overdriven, darkly worded and they undeniably cut a fork in the road that spawned much heavy music. But to me, music can only be so heavy if it doesn’t have something lighter to see it up against, and that’s always been my dilemma with really getting Sabbath the way so many unwavering devotees of the church of heavy music do (Cough! Hoz! Cough! JK!). Zeppelin, however, there’s so much heaviness, but it comes intertwined with moments of somber melody, playful noodling, and frenzied shredding. To me, it’s that differential between moods that make the heavy-hitting moments land so hard. I don’t get what they tapped into, but I like trying to get it. Houses of the Holy has a wide reach of feels and so those heavy moments land most heavily. Also, me and Hoz have for many years passed the time on long drives debating which is the better band. Clearly, Zep all the way!

MATHESON-MARGULLIS: This album was one of the very first binding ties that we found in our friendship! I remember very clearly the moment that we discovered through shooting the shit that we both held this album near and dear. There was a moment of eye contact that informed me that the album meant as much to him as it meant to me. And I knew then that we were destined to be true friends. That is especially interesting to me because of what Karp had already done for my musical awakening. They were so heavy and simultaneously so silly and fun that you had to lighten up when you listened to them. They had a feeling of friendship and camaraderie to their music that was missing from many of their equals.

VERELLEN: Agreed! It’s strange how many good friends I still know well into adulthood that I related to based on a mutual appreciation of Karp. There’s not a bazillion of us, but Karp is seriously one of those bands that was a sort of “tell” that you also liked it heavy, but with a little less costume and more genuine silly. So much heavy music is cartoonishly dark, and not many of those dark, brooding, frowning bands are all that convincing. Karp’s doses of humor peppered between odd time signatures, fuzzed-out riffing and shrieking vocals make their intense moments feel more sincerely fiery than many donning face make-up, smoke machines and spiked gauntlets. Also… “Lorch-Miller” is the heaviest song.