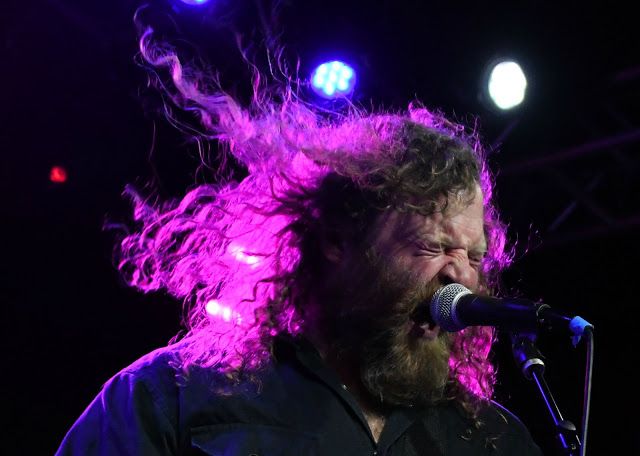 (via There's Something Hard in There)

Stay fucking alert. Keep your eyes and ears fastened on the trio that stands before you, pummeling their instruments to the hilt while launching forth their brain-piercing sound.

You have entered Helms Alee's realm and you're better off for it.

The Seattle band features guitarist Ben Verellen, bassist Dana James and drummer Hozoji Matheson-Margullis. All share roaring/melodic vocals and are equal architects of their sound, which grasps onto heaps of noise and yanks the listener into myriad directions. Rage, pull back with a softer part, rage again. Emotions being torn into on the entire journey.

"That's awesome," Verellen notes about my take on the band during a recent phone interview.

"An adventuresome traversing of three friends' brains," is how James described the band's sound in a Facebook message a few days later.

Verellen noted that Matheson-Margullis' former band TNA possessed some similarities to Helms Alee's sound: "I guess kind of... delaying, kind of meandering riffs and stuff like that."

The axeman and owner of Verellen Amplifiers in Fremont discussed how the band -- which formed in 2007 and has released five albums -- interacts while it pieces together its tunes.

"You love bands that everybody speaks the same language and so that they can kind of talk about what their ideas are and what they're doing. We don't really have that luxury because the three of us don't understand one another the way we talk about music at all -- it's completely weird. It comes together musically more than it does conversationally," said Verellen, who formerly played guitar in Harkonen and Roy and drums in These Arms Are Snakes.

*** It looks fucking tough to play, and there's a multitude of things going on there. What makes it all click and link together for your sound?

That's a good question. You know, it doesn't feel like that to me. That's just because we play these songs over and over again and we don't do a lot of dissecting and understanding, like I was saying, in a conversational way, parsing it and understanding it and being able to explain it to one another. It's really just whatever weird thing happens, we just do it until we like it and just do it over and over again and then it becomes second nature at some point. Not as complex as maybe it comes across to somebody just hearing it.

*** How does it feel when you play your music? Just watching you guys, everybody's kind of got their own thing going on but it's so perfect together.

Verellen and James sowed the seeds for Helms Alee, first with a few different drummers and then a drum machine. At Matheson-Margullis' first practice, they immediately nixed the machine.

"You're fired," Verellen joked about the machine.

The man with a horde of pedals at his feet and plethora of sounds pouring out of his amps during gigs nailed down what his bandmates bring to the table:

"I was tripping on Hozoji's drumming (in TNA), she definitely had a different approach to writing music for drums than any other drummer I played with. Or singing, for that matter," Verellen said.

On James -- who used to play in Your Enemies Friends -- he added: "We got to playing together, and she's sneaky weird, so she kind of like comes across at first like really simplistic and kind of the anchor. But then she starts sliding these little things in that she can't really break down what they are. They're these really complicated, sort of off-time signature weird patterns. They kind of synch up eventually. She's awesome."